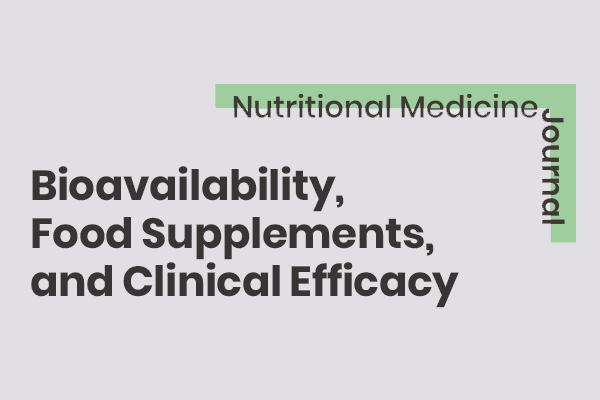 By Benjamin I. Brown

Affiliation: B. Brown is with the Nutritional Medicine Institute, London, UK, and the British College of Nutrition and Health (BCNH), London, UK.

Published by: The Nutritional Medicine Institute

Open Access: This is an Open Access article distributed under the terms of the Creative Commons Attribution-NonCommercial-NoDerivs licence (http:// creativecommons.org/licenses/by-nc-nd/4.0/), which permits non-commercial reproduction and distribution of the work, in any medium, provided the original work is not altered or transformed in any way, and that the work is properly cited. For commercial use please contact support@nmi.health

The ‘bioavailability’ of a dietary substance has no strict definition, but in nutritional science it typically refers to the relative amount of a substance present in circulation from one source compared with another source.1  Some of the main factors affecting bioavailability from a pharmacological perspective are solubility, extensive pre-systemic metabolism, poor membrane permeability, and active efflux transportation.2

Bioavailability of dietary substances is, however, complex, and can be further divided into extrinsic diet-related and intrinsic host-related factors.3

Diet-related factors: the chemical form of the nutrient, the nature of the dietary matrix, interactions between nutrients and/or organic components, and food preparation and processing practices.

The bioavailability of nutrients from food is also strongly influenced by individual variations in gut bacteria and single-nucleotide polymorphisms (SNPs), which means there is a large inherent and natural inter-individual variability.4,5

Clinically, the relevance of bioavailability is concerned with two major questions.

1. Is this product more bioavailable than another comparable product.

2. Does enhanced bioavailability result in a better clinical outcome?

The first question can be answered with a pharmacokinetic study assessing the bioavailability of the substance in question. The second question can be answered with a study comparing the clinical effectiveness of the enhanced-bioavailability substance against a comparable substance without enhanced bioavailability. For clinicians, however, pharmacokinetic studies are difficult to assess and may not be truly representative of the commercial product they supposedly substantiate. Also, comparisons between enhanced-bioavailability products and those without enhanced bioavailability on clinical endpoints such as disease biomarkers or symptoms are almost non-existent, further limiting the ability to truly determine differences in efficacy.

This makes assessing the clinical relevance of enhanced-bioavailability food supplements challenging; however, focusing on the above two simple questions may help navigate this, as we explore in the following examples.

The example of magnesium

Magnesium is a popular food supplement with claims of bioavailability tending to focus on one type of magnesium versus another. There are several different types of supplemental magnesium available (e.g. citrate, glycinate, orotate, malate, oxide, sulphate and threonate). 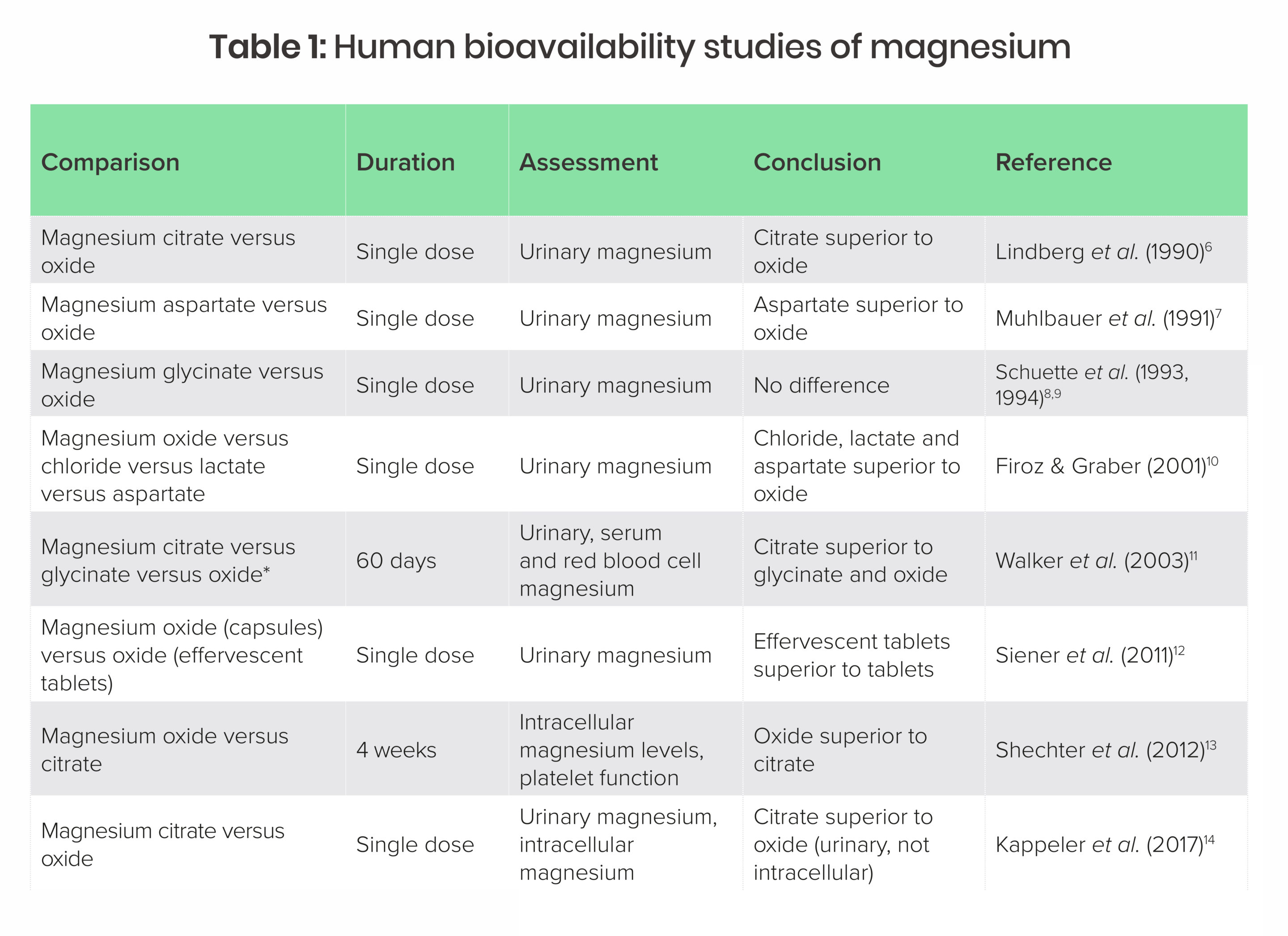 *Walker et al. (2003) claimed to provide a dose of magnesium glycinate in two tablets that is physically unachievable and likely provided 30% less than claimed. The author contacted the study authors to query this but had no response (personal communication).

Bioavailability may become irrelevant when we consider which types of magnesium have demonstrated efficacy clinically. Comparisons between types of magnesium on clinical outcomes are non-existent, and clinical studies have generally found a variety of forms (in particular aspartate, carbonate, chloride, citrate, glycinate, orotate and oxide) are able to correct deficiency and are clinically effective for a wide range of illnesses.18 It appears that any difference in absorption between various types of magnesium may not be meaningful in terms of actual clinical benefits.

The example of turmeric

Research has generally shown that curcumin is poorly absorbed with relatively low blood levels after people ingest high curcuminoid extracts of turmeric.19 Paradoxically, clinical studies of turmeric extracts have found that it may be effective despite low absorption. For example, human clinical trials of curcuminoid-rich turmeric extracts have demonstrated preliminary evidence of efficacy in the absence of bioavailability enhancers in patients with ulcerative colitis,20 osteoarthritis,21 prevention of type-2 diabetes,22 premenstrual symptoms,23 depression,24 and Alzheimer’s disease.25

There have been several proposed reasons for why high curcuminoid extracts of turmeric may be effective despite low absorption. Curcumin is metabolised into a variety of other compounds after digestion and absorption, and these metabolites may actually be more effective than curcumin itself.26 Also, local gastrointestinal effects could also mediate gut−systemic interactions, in other words, curcuminoids may not need to be absorbed to be effective.27

But it is plausible that, at least in some cases, enhanced-bioavailability turmeric products could be more effective than equivalent counterparts. Although there are a large amount of pharmacokinetic studies assessing the bioavailability enhancers on serum levels, none compares such products on clinical outcomes, so it is hard to determine whether enhanced products are actually more effective clinically. Looking at two bioavailability enhancers, phosphatidylcholine and polysorbate 80, it appears translation to better clinical efficacy may depend on the formulation.

A well-studied curcuminoid−phosphatidylcholine complex (Meriva®; Indena, Italy) has demonstrated enhanced absorption and bioavailability, and over 30 clinical studies support the efficacy of a dose providing > 200 mg curcuminoids daily.28 Although no head-to-head studies related to clinical efficacy exist, we can contrast two clinical trials in patients with psoriasis. In the first, 4500 mg curcuminoids daily for 16 weeks resulted in a low treatment response, which could have been a placebo effect.29 In contrast, 400 mg daily of the curcuminoid−phosphatidylcholine complex for 12 weeks significantly reduced symptom scores and a serum inflammatory biomarker (IL-22) when compared with placebo.30

The artificial emulsifier polysorbate 80 has also been used as a bioavailability enhancer, but does not appear to improve clinical efficacy. In a pharmacokinetic study, a single dose of polysorbate 80-complexed turmeric extract providing 500 mg curcuminoids resulted in a 185-fold higher plasma concentration (area under-time curve) than a reference product, although there was less pronounced absorption in male study participants.31 It is worth noting that although commercial products often claim 185 times higher absorption, they typically provide 10 times less of the active dose used in this study and so are not exactly representative of the study used to substantiate bioavailability claims. A subsequent clinical study of polysorbate 80-complexed turmeric extract (NovaSOL®, Aquanova AG, Germany) found that a dose of 98 mg of curcuminoids per day did not alter blood lipids, inflammation or glucose, so it is currently unclear if it is more, or less, effective than a comparable product without polysorbate 80, despite enhanced absorption.32

It appears that turmeric extracts may be effective in the absence of absorption enhancers, but that, in some cases, such as in the example of psoriasis above, absorption enhancers may enhance clinical effectiveness. An important consideration is that, contrary to logic, better absorption may not always equate to better efficacy, and some formulations may lack evidence of improved clinical efficacy despite a compelling pharmacokinetic study.

The above examples provide a cautionary tale that encourages critical assessment of claims of enhanced bioavailability. Although such claims are made, they may not be well substantiated, and even when there is a pharmacokinetic study demonstrating enhanced bioavailability it may not be representative of the product composition or have been demonstrated to translate to better clinical efficacy in a head-to-head comparative study assessing disease endpoints. Further, a potential concern is that a spurious claim could be used to justify a lower dose and therefore result in an ineffective prescription. In the practice of nutritional medicine, being able to scrutinise bioavailability claims is therefore important when our aim is to optimise health through the judicious use of food supplements as a complement to patient care, while providing the most appropriate, cost-effective and evidence-based management approaches.

Back to the Top